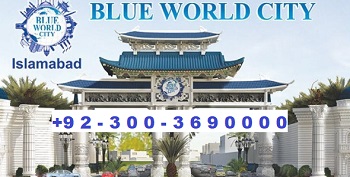 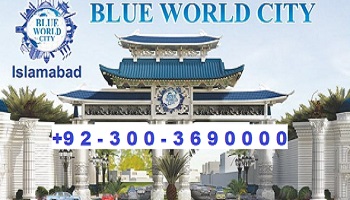 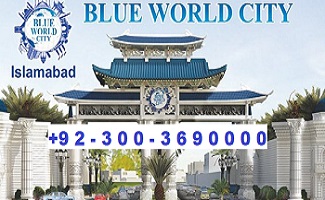 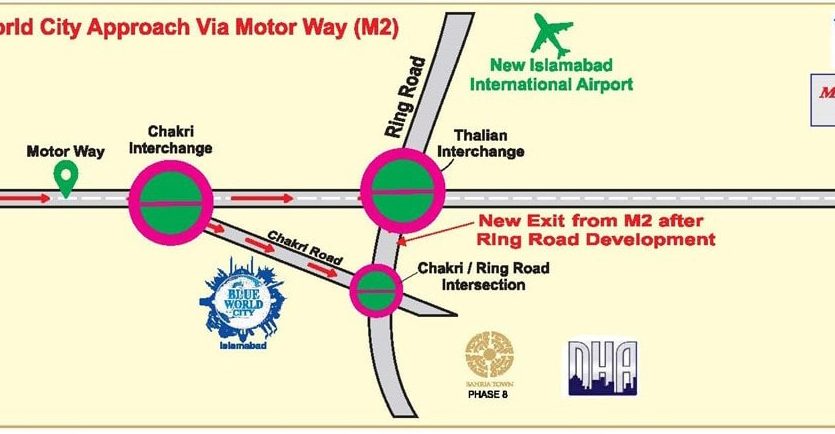 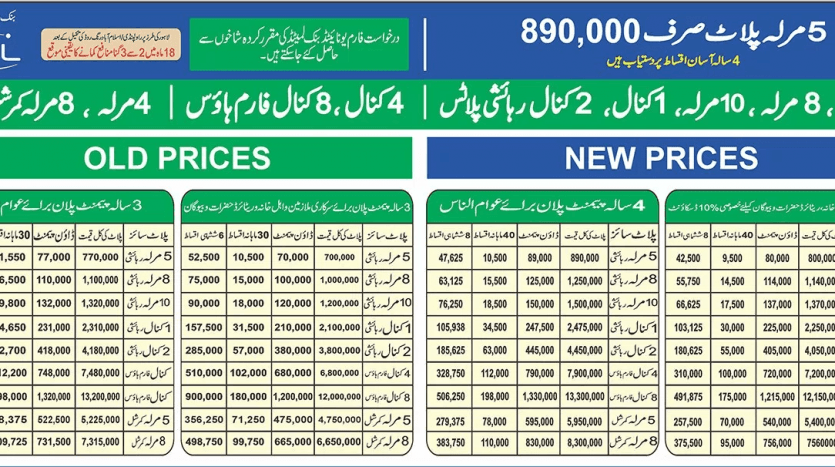 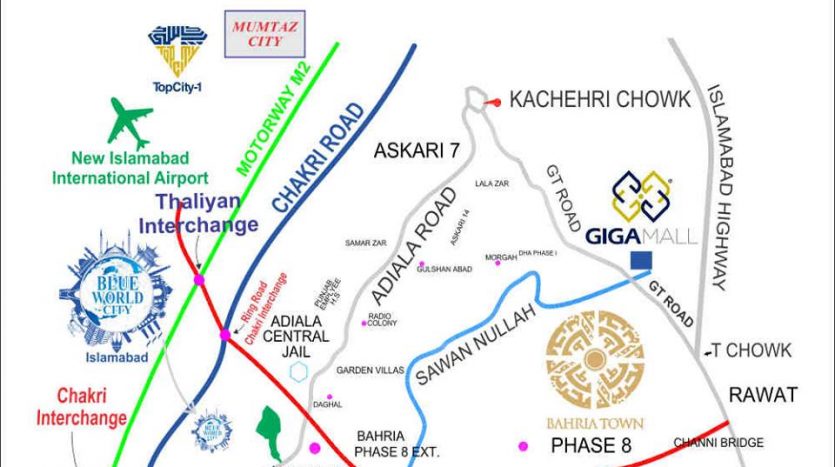 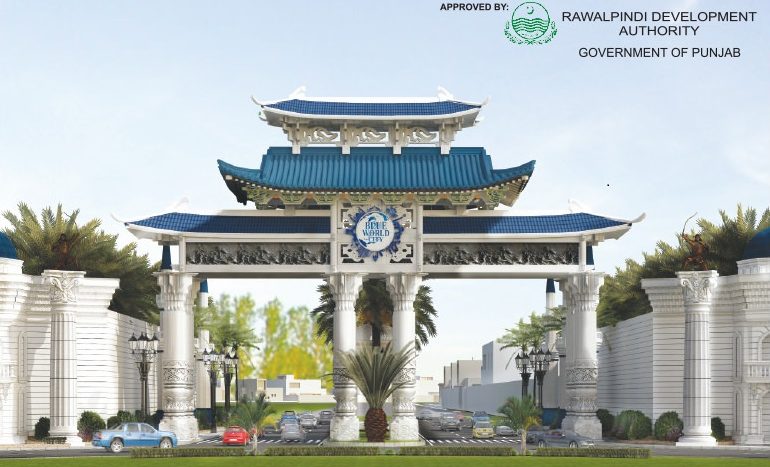 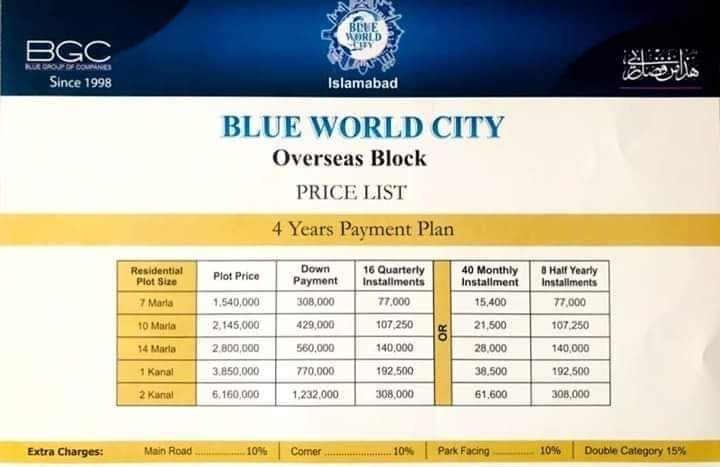 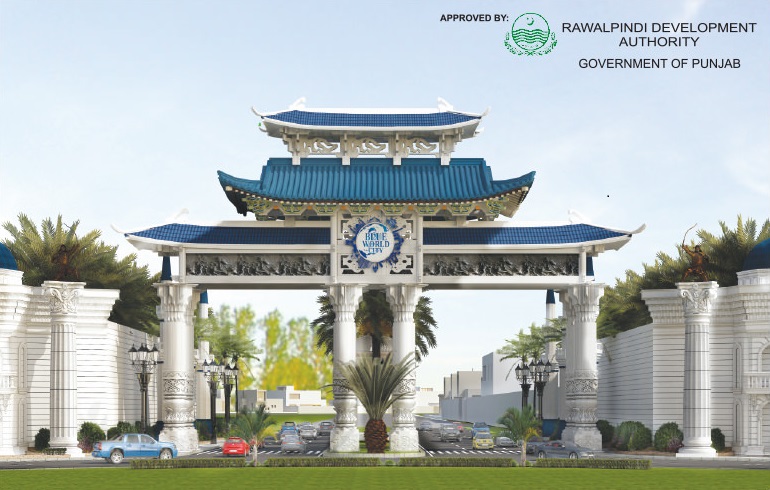 Blue World City is a mega housing project by Blue Group of Companies located in proximity to both Rawalpindi and Islamabad city. It will be the first Pak-China housing society in Pakistan whose development will be done by Chinese. It is one of the most affordable housing project in the area right now and has become quite popular among the investors and people who are looking for a place in a budget with a good installment plan.

Let us discuss important aspects of this society for an comprehensive overview.

Completed Projects by B.G.CSaad Nazir has previously given successful business and housing ventures such as PIA Co-operative Society, Center Park Lahore, Blue Sapphire, Blue mart & Blue technologies. This is the latest project launched under the banner of Blue group of Companies.

Rawalpindi Development Authority (RDA) has issued the NOC to Blue World City Rawalpindi against the Vide Letter no. RDA/MP&TF/F-PHS-PTR-10/148. Dated: 19-02-2019 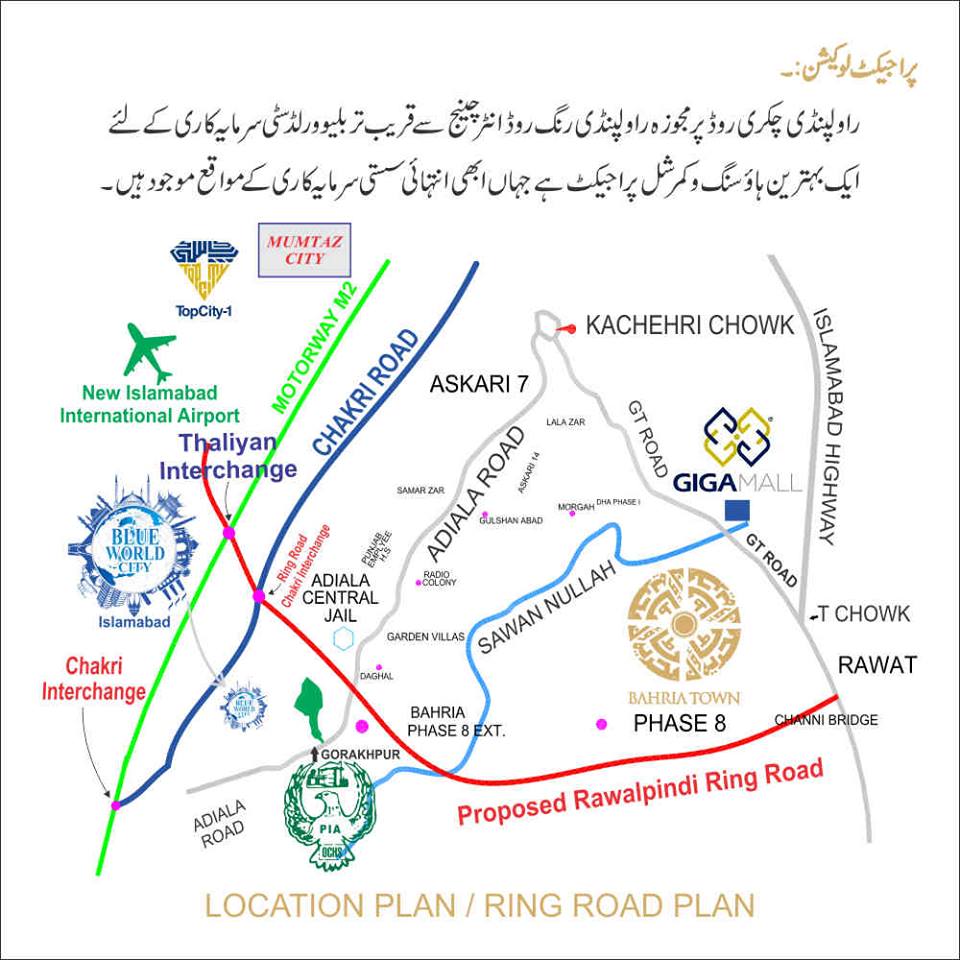 Blue World City Islamabad is a housing project with features matching international standards.  It is solely designed keeping in mind the requirements and facilities demanded by the overseas Pakistanis. The main features included in the society are as follows:

Blue Group of Companies have launched the  Blue World City Overseas block in their housing society. This block is gradually becoming the high point of this remarkable housing project. The overseas block is intended solely for the overseas Pakistanis who have acquired higher expectations and taste for lavish facilities. A limited quantity of residential and commercial plots are available in an overseas block on a first come first serve basis. This opportunity is a convenient opportunity for Pakistani citizens living abroad to invest safely in Pakistan at a very economical rate.

The Overseas Block has direct access from Chakri Road and will enjoy its designated gate directly through the Main Gate of the society, which is near to completion. The housing project will also have access from Rawalpindi Ring Road, which will directly connect Blue World City Islamabad with Motorway M-2 and Islamabad city in the next 2 years. The project is gaining a lot of attraction from the local and international investors for its convenient and appealing location.

Blue World City Islamabad is a housing project with features matching international standards.  The Overseas block is solely designed keeping in mind the requirements and facilities demanded by the overseas Pakistanis. The main features included in the society are as follows:

Blue world city is currently offering only a few sizes of residential plots in the Blue World City Overseas block, comprising of

Booking starts from only 20% down payment, while remaining amount is payable in 48 monthly or 16 quarterly installments. Following is the payment plan of Blue World City Overseas Block: 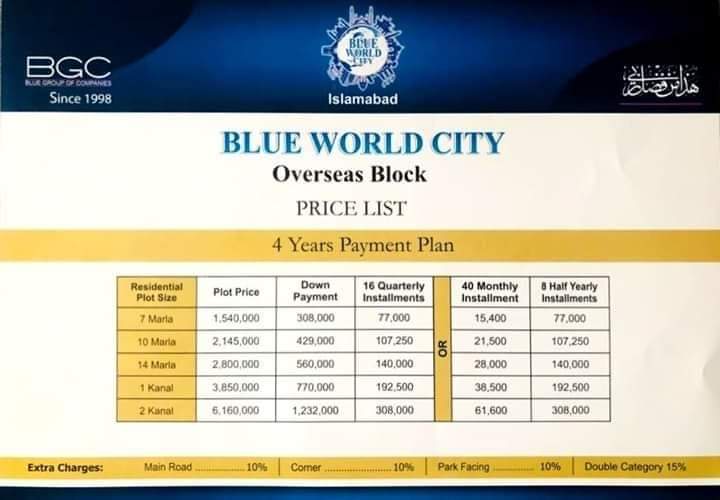 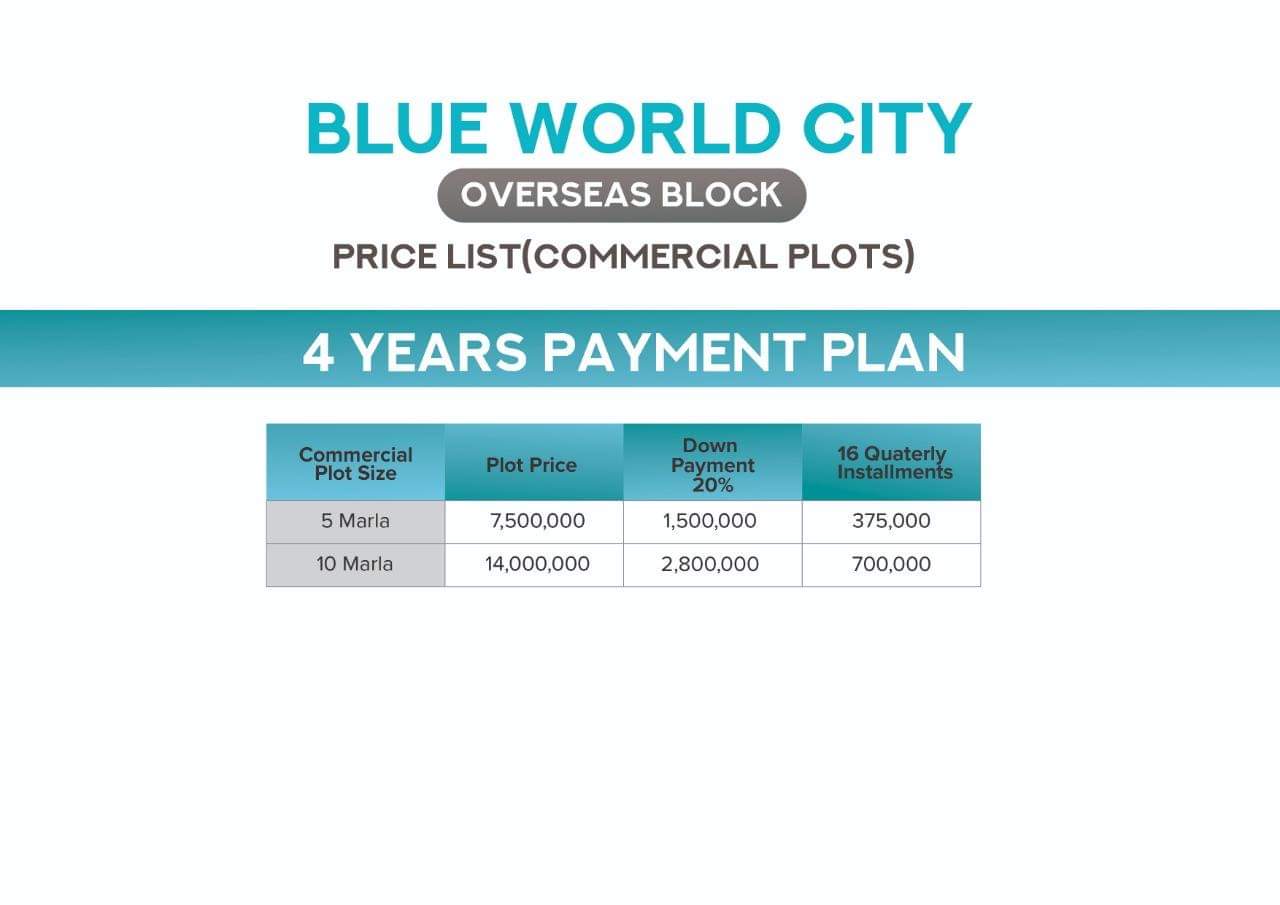 2 copies of your national ID card

2 copies of ID card of your next of Kin

Q1- What is Blue world City?

Q2-Who is the owner and developer of Blue World City?

Blue World City is a project of Blue Group of Companies, which is owned by Saad Nazir. The task of developing this mega project has been given to a Chinese company Shan Jian Municiple Engineering Company.

The layout planning permission of the society is approved by RDA and the society has applied for the renewal of NOC as well for the extension area and is in process to get approved, but rest assure Blue World City is guaranteed a legal housing society.

Q5-When will the development work start and how long will it take for the society to get fully developed?

Blue World City aims to provide its residents with all the basic and advance facilities including availability of water, electricity and gas 24/7.

Yes, there is a 3 year and 4 year easy installment payment plan offered by the society for the feasibility of the investors.

Q8-When will be the possession of plots given in the society?

The possession of plots is expected to be granted in 3 to 4 years. Initially the possession will be granted to the plots in phase 1 of the society due to early development of the blocks in that phase.

Q9-Are there commercial plots available in the society?

Yes there are various sizes of commercial plots available in the society, for complete details refer to the payment plan attached in the article above if you have missed it.

Q10-Is there any Overseas Block available in the society for Overseas Pakistani Citizens?

Yes the society has a dedicated overseas block specially designed for overseas Pakistanis in the society.

Q11- How will Blue World City become the hub of economic growth in the region?

Blue World City has signed an MOU with A Chinese Company for all the development work of this mega housing project. It is the first housing society developed by the Chinese in Pakistan, hence it holds a great significance in the hearts of the people of both countries so it’s called A Pak- China friendly city.

Although Blue world city is expected to take considerable years to get fully developed, it most definitely will be a pioneer society in the making. Other than presenting residential and commercial possibilities the society will also ensure the global standards of living and provide a secure environment for its residents. At the given moment it is the best opportunity for people with very low income to invest and bear fruit in the next few coming years. With the certain rapid development of the project, it will give its investors a 100% profit after its official launch. 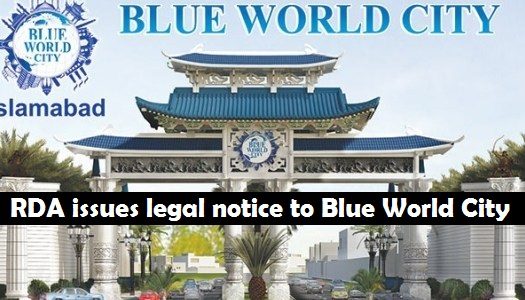