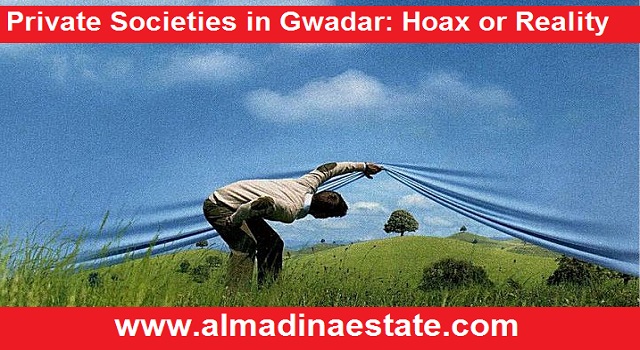 Private societies in Gwadar: Hoax or Reality, this article will give you an insight what and what not to do while investing in Private Societies in Gwadar. Hopefully more informed decisions will be made once you go through the reading material.

Gwadar has seen a sprout of private societies in 2003-4 and then again in 2014 till date. Previously private societies have failed to deliver their promises. They obtained NOCs from GDA (Gwadar Development Authority) and didn’t develop any infrastructure at all. No matter how big the name is they have previously encashed their brand name through extensive marketing and didn’t deliver.

The only infrastructure that was developed was some of the main roads and the gate of the society. However, the territories are marked and maps have been made with little or no development on ground. It is only advisable to buy in societies launched by the government.

To misguide people there are societies named such as China Village, Canadian Avenue, etc. which have nothing to do with the countries themselves or investors from the respective region(s). The only development on ground can be seen by Sanghar or New Town which are government societies. The remaining no matter how or small the group behind a private society little development has been done. There is no resale of such files or plots which belong to private societies.

The problem with Gwadar is that the price of land is really cheap compared to other areas such as Lahore, Karachi, Islamabad or any other major city. No private land is being acquired in a premium area. There price ranges from 900 lacs per acre as of 2016 to 1 lacs per acre. A minimum of only 30 acres is required to obtain NOC for a society from the GDA, therefore, every tom, dick and harry has a society in the area.

A new society by the name of Green Palms has been launched by none other than Rafi Group. It’s one of the big names in the development sector. The problem with the society is they are selling 5 marlas for a price of 7 lacs on installments over a period of three years. The area they have acquired is worth not more than 5-6 lacs per acre. This is the kind of hoax which prevails normally in the area. It’s better to buy open land instead. What one has to do is be vigilant while purchasing a file or plot in a private society. This current sprout of private societies is due to the development by the Government and interest of different countries in the third largest natural port in the world.

It is advisable to select an advisor for investment. People do require files or plots on installments but it’s better to stick to a private society in which the rates in and around the general area are reasonable. No doubt it would be expensive to buy on installments, two premiums are added one of the society’s infrastructure and secondly the premium of leveraging installments. But these two premiums have to be reasonable. Unless the price is reasonable compared to the advantages of the investment and its leverage one has to be vigilant so that he/she doesn’t end up paying societies such as Green Palms by Rafi Group undue premiums. It is out of these abnormal pricing that the societies are able to pay off their respective agents a huge margin instead of the rightfully deserved 2-5% commission.

Thoughts: One should be very wise while investing in installment based plans as well. One should have a reliable consultant or if starting afresh one should attach him/herself with someone with good knowledge of Gwadar.