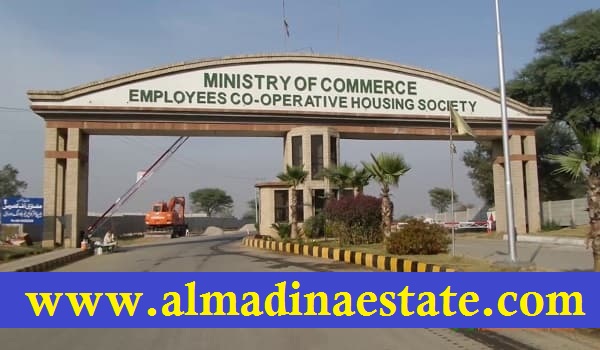 Ministry of Commerce Employees Housing (MCEHS) is emerging again as a noticeable project. After the society election, newly elected administration are set to take over. As a result, things have been significantly improving for the housing scheme. MCEHS is located quite near some of the most promising societies in the area including Top City-1 and Mumtaz City. It is not far from the new Islamabad Airport either, which has added to its attraction. So, on popular demand, here’s the latest update on the project.

The developers have promised excellent security with round-the-clock security staff. The housing scheme is also going to feature a beautiful mosque, and the commercial area will have a modern shopping mall, banks, restaurants, and other commercial amenities. A community centre/club, a medical complex, schools, and a water filtration plant are other amenities which are going to be provided to the residents within the society.

The society is 60-70% developed and possession is available for that area. Complete possession available for plots in Block B, while the greater parts of Blocks A and C are also available for possession. Meanwhile, the new administration, according to Khan, is all set to launch Block D as well.

Range between at least 40-feet wide to 100-feet wide are mostly complete. It also has electricity and water connections, but no gas connection yet.

The housing scheme has seen a lot of ups and downs in its market over the past year when transfers were not taking place for a short period of time.

Now, the administration has been replaced through election, and the new administration is set to launch the new phase. Balloting is going to take place soon, and the transfers would be opened within a month and a half, according to Khan. As a result, the prices have suddenly begun seeing a significant rise – so has the demand and interest in the society.

The prices in the housing scheme currently stand as follows:

It must be noted that while generally the price for 1-kanal plots ranges between PKR 2 to 2.8 million, the prices for some 1-kanal plots located along the main boulevard can be as high as PKR 5 million.

The options for the investors

Those who have already invested should consider holding it for another month and a half until the balloting happens and the transfers open. The prices are increasing because of the changing dynamics for the society and they appear set to continue at least until that time.

Those who are looking to invest now, should consider mid-term investment, he explained. This is because after the elections, the prices have already shot up significantly for the short-term investment. On the other hand, the prices are still quite low as compared what they were a year ago. So, in the medium term (a period of a year and a half will be a good estimate), the prices can be expected to rise quite high in comparison.